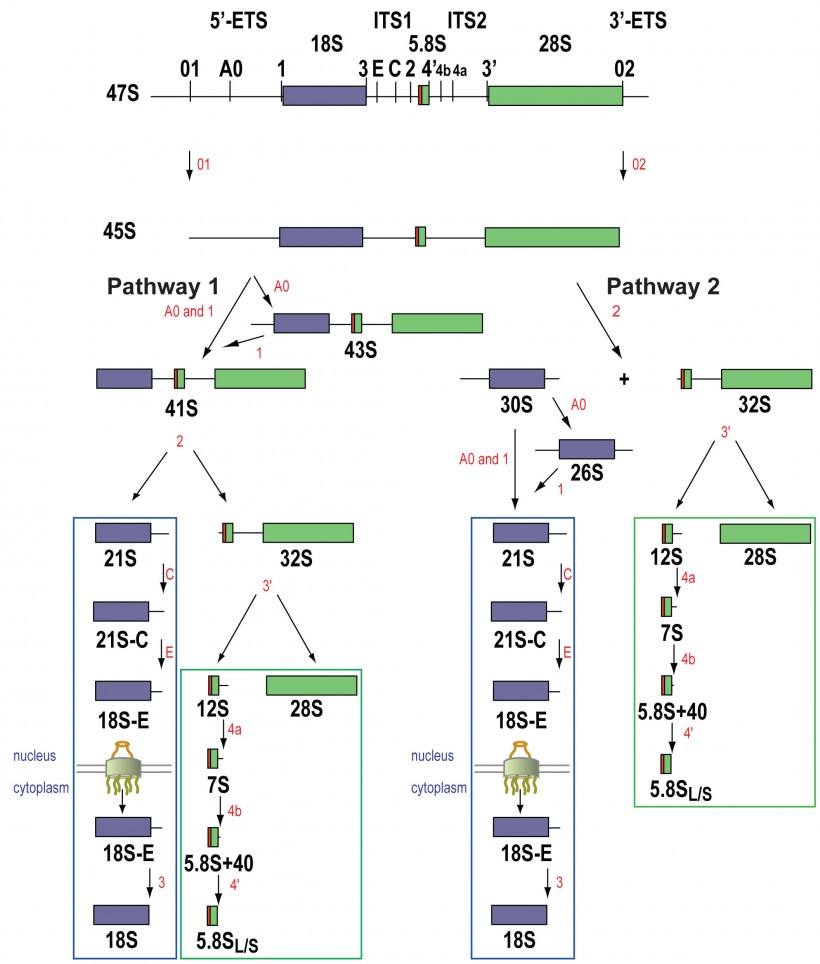 The 18S, 5.8S, and 28S rRNA sequences are embedded within the 5’ and 3’ external transcribed spacers (ETS) and internal transcribed spacer 1 (ITS1) and ITS2. The primary transcript (47S) is cleaved at sites 01 and 02 on both sides of the molecule, generating the 45S pre-rRNA, which is processed by two alternative pathways. In a minor pathway, site A0, in the 5’-ETS, and site 1, at the 5’ end of 18S rRNA, are cleaved, yielding the 41S pre-rRNA. The 41S pre-rRNA is digested at site 2 within ITS1, separating the RNA precursors destined to become the small and large subunits, the 21S and 32S pre-rRNAs, respectively. The 21S pre-rRNA is cleaved at site E, producing the 18S-E intermediate, which is then processed at site 3 into the mature 18S rRNA. Maturation of the 21S is a sequential process, and a 21S-C intermediate is detected upon depletion of specific assembly factors (for an example, see RPS3 depletion, Fig 2B). Processing of the 32S within ITS2 generates the 12S pre-rRNA and the 28S rRNA. The 12S pre-rRNA is successively trimmed to produce the 5.8S rRNA by a series of exoribonucleolytic digestions involving specific subunits of the RNA exosome (see Fig 6). In the alternative major pathway, the 45S pre-rRNA is directly cleaved at site 2 in ITS1, prior to cleavage at sites A0 and 1, generating the 30S and 32S pre-rRNAs. Processing of the 30S pre-RNA at site A0 and 1 produces, respectively, the 26S and 21S species. In human cells, as in budding yeast, there are two forms, short and long, of 5.8S rRNA (red extension). Synthesis of the 26S pre-rRNA results from partial uncoupling at cleavage sites A0 and 1; when such uncoupling occurs the 43S pre-rRNA can also be observed. The branches that are similar in the two major maturation pathways are boxed in blue and green.